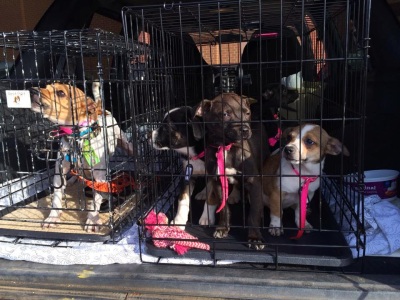 The drive home after the Little Rock Half proved to be more exhausting than the race itself.  As I mentioned, by the time we left it was pouring, the temperature was plummeting, and we were under an ice storm warning.  The original plan was that we would leave ahead of the storm and stay in front of it on the eastward drive home.  It did NOT pan out that way.  After we’d been on the road for maybe an hour, ice was already accumulating on my truck.  I snapped these at a gas station when I stopped to pee (one of the MANY times… if nothing else, I was well hydrated for the race). 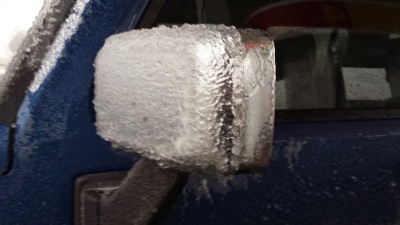 And then things just kept getting worse…

And THEN my windshield wipers froze up and things got epically bad. 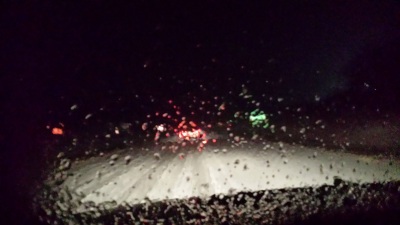 The last two and a half hours of my drive home looked like that.  All I could do was keep the defroster on high to keep it from freezing to my windshield.  Oh well, it’s not like the wipers were doing me much good anyway.  I kept was having to stop every half an hour or so to knock the ice off of them.  The drive that should have taken me five hours to make ended up taking just a tad over eight.  I was so tired and a nervous wreck by the time I got home.  I couldn’t even begin to tell you how many wrecks and cars in ditches I saw on the way home.  I just put it in 4WD, said my prayers, and took it slow.  Mom wanted to stop and spend the night somewhere, but I knew if we did we would be there for a lot longer than we’d bargained for, so we just toughed it out and kept going.  I’ve never been so happy to see my house in all my life.

I’ve always loved my truck, but I have a whole new level of respect for her now.  She took good care of me last weekend.  She looked pretty rough after the trek. 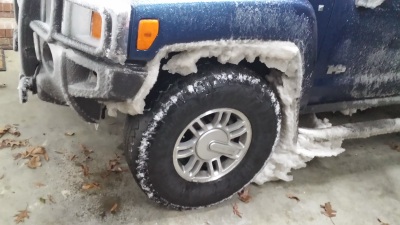 I walked inside and directly to the wine.  Two glasses later I was out cold.  It stopped sometime through the night, and we woke up to 6-7 inches (depending on where you measured) of sleet on the ground with just a dusting of snow on top.  As much as it sucked to drive home in it, I’m super grateful the storm didn’t come through any earlier than it did.

I’ve been saying all winter long that I wanted snow… I guess I should have been more specific.  I would have preferred it to be more snow and without 6 inches of ice underneath!  It sure did look pretty the next morning though.  And the dogs LOVED it! 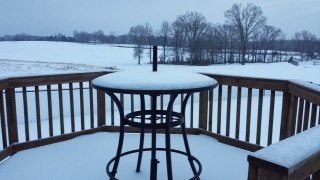 1.     Twice this year we’ve been predicted to get about six inches of snow.  Both times they were wrong to the tune of approximately six inches.  We got our biggest snowstorm of the season this week.  See those three snowflakes on the shoulder of the road?

2.     I’ve always known I need to be doing some type of strength training in addition to running if I really want to see improvements and lose some fluff.  The thing is… I HATE STRENGTH TRAINING.   I’d rather run 10 miles than do 10 push-ups.  Because I hate it so much and because I don’t have anyone crawling up my ass to make me do it, I usually just don’t do it.  But now I’ve decided I hate being fluffy worse than I hate strength training, so I’ve joined a CrossFit gym.  The first month is what they call the “on-ramp” where they teach you proper technique and shit.  It’s mandatory before they let you join their regular classes.  The first class was Monday.  It was very elementary.  They really only showed us some equipment and went over some of the stuff they do as a warmup.  I missed the second class Tuesday night because the road the gym is on was closed due to flooding.  The third class will be tonight.

3.     My mother and sister and I went to Memphis to see Wicked on Sunday.  I’ve seen it once before, but it was just as good the second time around!

The newspaper in my small town is pretty ridiculous.  Rarely is their front page story anything that is even remotely newsworthy.  Yesterday was no exception, but I did get a good laugh out of it.

John W______ and sons Austin, 10, and Alex, 12, built a huge snowman Monday afternoon in their front yard at the corner of D____ and H___ streets. During the night, however, vandals knocked it down. Mom Leigh W______ said instead of getting angry, the three turned the remains into a crime scene, complete with a law enforcement officer (right) questioning a suspect (left) while the victim (center) is cordoned off by green crime scene tape.

There has been absolutely nothing postworthy about this week.
I put in 40 ordinary hours at work.  I’ve run 18.5 uneventful miles along my typical routes and biked 45 unexciting minutes at the gym.  I went to the same ol ‘grocery store and cooked a few ho-hum meals.  I did the same mundane housework.  I sat in the same well-worn spot on the couch and watched the usual TV shows.  The only thing NOT ordinary about this week was this:

We got about five inches of the prettiest, fluffiest, clingy-est snow I’ve ever seen Tuesday night.  You know, the kind that makes a killer snowball.  That made for a super fun Wednesday afternoon and two super tired dogs!