Even before I decided to give this whole “50 half marathons in 50 states” thing a whirl, I had registered for what would be my 7th state–Mississippi Blues. It was within driving distance; it was on my birthday; and I had just heard great things about it, so why the hell not?!  The hubs doesn’t usually come with me to races, but since this was my birthday weekend, I didn’t give him an out this time.  He and I both worked until lunch Friday and then headed out on the 5-hr drive to Jackson, MS.  We drove straight to the convention center for packet pickup, and we were in and out of there in just a few minutes.  We arrived at about 6:30, so I wasn’t expecting to find the expo still set up because the web site said the expo ended at 6:00 but that packet pickup would be available until 9:00.  But there were still LOTS of people coming in, so I guess the vendors decided not to pack it up as long as people were coming in.  I made a quick round through the expo but didn’t buy anything even though it was pretty hard not to go wild at the Gypsy Runner booth.  So much cuteness!!!

We were staying at the Marriott, which was just a few blocks from the expo, and on the way there we saw where the start line was set up for the next morning.  It was super close to the hotel, so I was pretty stoked about that.  It was CRAZY cold, and I wasn’t looking forward to walking a long way to the start.  I knew it was supposed to be pretty close to the hotel, but I didn’t realize exactly how close it was.  I’m usually more frugal when booking hotels for races and stay a little ways out where it’s cheaper, but I splurged a bit on this one since it was my birthday and all.  🙂

So we got all checked in and the first thing we noticed when we walked in the room was how cold it was in there!  The heat was set to 73, but it couldn’t have been over 60 degrees in there.  We assumed that they hadn’t had the heat on in the room long and just cranked it up and called in a pizza for delivery because we just really didn’t feel like getting back out.  When the room still hadn’t warmed up by the time we were ready to go to bed, I called the desk and complained about the room being so cold.  Turns out they knew that was a problem for that room and a few others as we were directly over the parking garage.  They said they try not to put people in those rooms when it’s that cold, but they were sold out that night, and since we were some of the later people checking in, we were among the lucky ones.  They brought us a space heater and extra blankets and even knocked $50 off our bill for the night without me even asking!  Awesome customer service.  Anyway, that space heater made all the difference in the world.  I thawed out and was asleep by 9:30 with my alarm clock set for 5:30 to give me plenty of time to get awake and functioning before the 7:00 start.

We headed down to the lobby shortly after 6:30 but stood around chatting and prolonging heading out into the cold (starting temp was 23 and felt like 18).  About 6:45 we started the short walk to the start line.  As soon as I walked outside I noticed how quiet it was.  I kind of panicked at first thinking I had missed it or we were farther away than I thought, but I looked around at all the other runners around me and thought we surely didn’t all make the same mistake.  I guess I’m just spoiled to a lively race start.  I don’t think I’ve EVER been to a race that didn’t have a band or piped-in music or SOMETHING at the start.  There was absolutely nothing here.  A guy played the national anthem on the electric guitar, but that was it.  Just an emcee on the megaphone announcing how many minutes to start every so often. 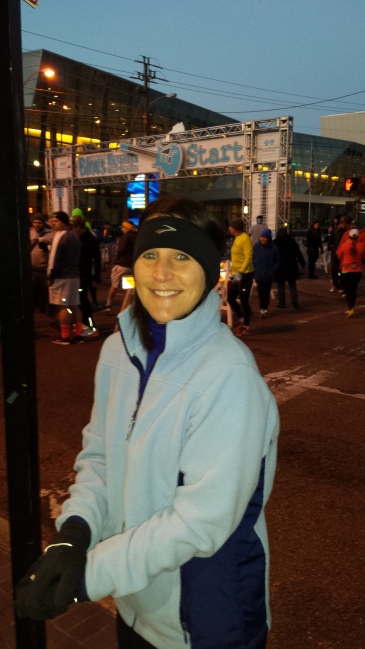 I seeded myself around the 4:20 full marathon pacer and moved to the edge of the corral so I could hang with D until the start.  When it was almost time, I handed my coat over to him and he headed back up to the room to go back to bed.  Yeah, races just aren’t his thing.  haha

There was absolutely NO energy to the start at all.  And that set the tone for the entire race.  Before I bash it too much, let me start by saying that it was very organized and the volunteers were great.  They were very friendly and helpful and just the fact that they were out there braving the cold for us was very much appreciated.  They were amazing and I thanked every one I saw.  But the race itself?  The race kind of sucked, y’all.  It was just…boring.  There was exactly one band playing on the 13.1-mile course.  The course was extremely challenging with constant hills, but that’s not why I wouldn’t do it again.  I don’t mind a challenging course.  I enjoy it actually.  But there just wasn’t anything to look at.  Several miles of it were right by the interstate, for Christ’s sake.  There was virtually no spectatorship.  I get that it was cold, but I’ve run cold races before where there were tons more spectators than this.  When we came up on the college campus I thought, “Yes!  This will liven it up a bit!”  Not a soul in sight.  I was so disappointed!  The other races I’ve done that have gone through a campus, that’s been the liveliest part!  At Murray State, I think every frat boy on campus was out there acting a fool.  I know all of this stuff is just personal preference.  I know there are a lot of people that take running more seriously than I do that think these things aren’t important (and think people like me who enjoy these things shouldn’t be taking up space on “their” course), but that’s just my subjective take on it.  I’ve run small races before too and was fine with it because I knew ahead of time that it was a small race with no frills and extras.  I guess in my mind I just had this event built up to be more than what it was.  It certainly seems to me like it was advertised that way.  Like I said… subjective.

Now the objective… This was a super challenging course!  Although I do prefer a hillier, rolling course over a pancake-flat one I was kind of over the hills by the later miles of this one.  I only have 11 miles worth of data from my Garmin because my dumb ass forgot to turn it on when we walked out of the hotel.  It was only when I took my coat off right before the start and saw my watch on my wrist that I remembered.  Of course it didn’t find a signal before the start.  When it finally found a satellite, I could see the Mile 2 marker ahead, so I just hit the start button when I reached that marker.  Since I didn’t have a watch for the first couple of miles I just tried to concentrate on not letting myself start out too fast.  I have a tendency to do that–especially when I’m cold!  I did a pretty good job of pacing myself I guess because I never really bonked.  I did get tired of the hills and started walking parts of them toward the end.  I knew beyond the shadow of a doubt not to expect a PR at this race, but I was kind of hoping for a second best.  As I watched my time during the race I knew that was possible but it was going to be close because I didn’t know my time from the first two miles.  At mile 12 I decided to give it what I had left.  Lucky for me there were no major hills during that last mile.  haha  When I crossed the finish line, my watch said 1:53 something, but I still didn’t know my time or if I’d hit my goal of second-best.  I was hoping for anything below 2:13:20, which was my time from the Shamrock Half back in 2012, but I’d have to wait to find out.

I found D right out of the finisher’s chute.  I really didn’t even realized I’d walked out of the finisher’s area until I was out of it.  When I crossed the line, I was handed my medal and a bottle of water and was offered a space blanket, and I kept walking to where I thought the food would be.  But there WAS none.  That was where I found D.  I asked him if I missed the food, and he said he hadn’t seen any.  I looked around to ask another runner where to get whatever they were eating, but… NO ONE had anything.  There was nothing!  I’ve run $15 5Ks that at least had fucking bananas and Oreos at the end.  Again, I guess those are just my personal expectations.  I didn’t read anything that promised finish line refreshments, so my disappointment was unfounded.  I just kind of assumed there would be something because I’ve never been to a half marathon where there wasn’t.  Another major strike against this race in my mind.  Had I known, I’d have brought something to MS with me to make a protein shake.  As it were, we walked back to the hotel and I ducked into the hotel restaurant and asked if I could just buy a banana.  They graciously just gave me three… I think probaby just to keep me from coming in and sitting down. haha

Aside from the awesome volunteers, I have to say the only thing I liked about this race was the medal.  Yes, I’m that shallow runner.  Bling size matters. 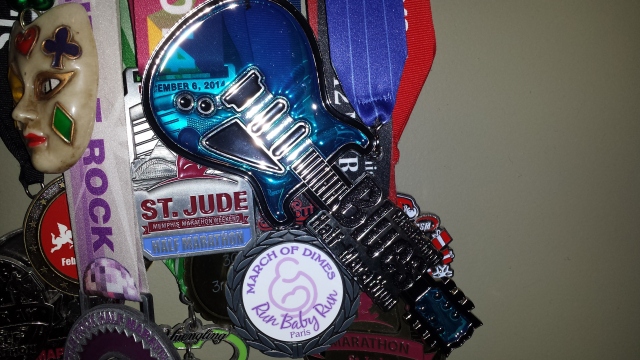 When the results were posted in the afternoon, I found out that I have a new second-best time by ONE WHOLE SECOND!  hahaha 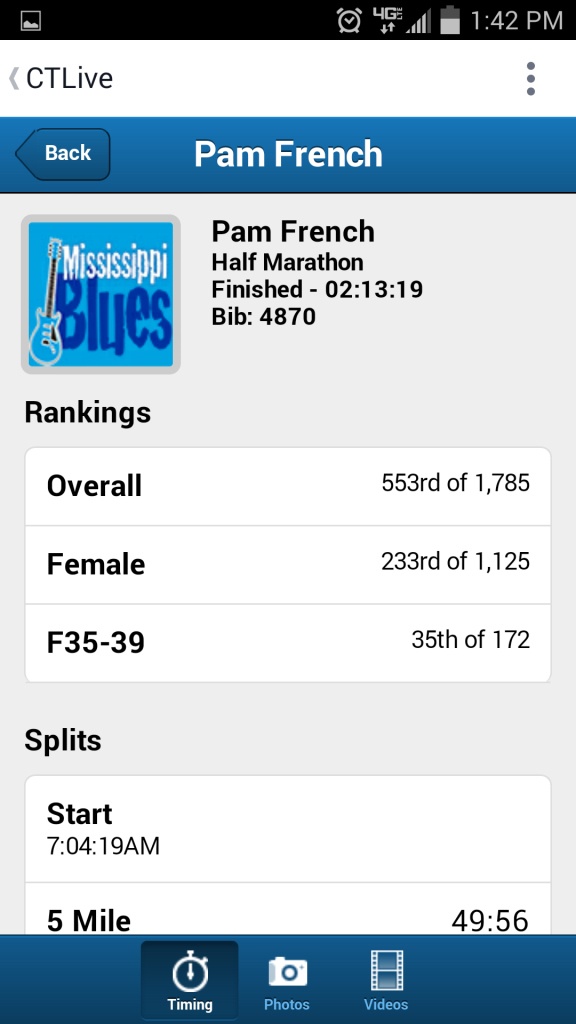 Closing thoughts:  Did I enjoy myself?  Yeah, I did.  It was a great quick trip away with D, and we just don’t get that much anymore since we bought the business last year.  I gave a solid effort on a difficult course and I’m happy with the results.  Would I recommend this race to anyone else?  No.  Not by a long shot.  If big races are your thing, you’ll be disappointed.  If small races are your thing, you may enjoy this one, but you’ll pay more for registration than what it’s worth.