I’m still working my way through some of the cookbooks and bookmarked web sites I already have (before I hopefully get a couple of new books from my wishlist for Christmas!).  These all came from web sites, so I’ve included links with all of them.  Good stuff here!
Vegan Sloppy Joes from Mouthwatering Vegan (full recipe in link!) – Again, this isn’t a new one, but it’s one of my favorites.  For me, sloppy joes are like chili–I never make them when it’s warm.  I don’t know why.  They just seem like a fall comfort food!  My favorite thing to use as a base for these is Ground TSP Beef from Cookin’ Crunk.  I’ve used frozen vegan crumbles before, but it just wasn’t the same.  Bianca’s ground TSP makes a PERFECTLY textured sloppy joe! 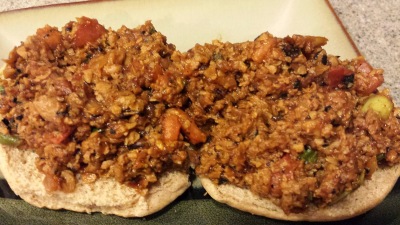 Stuffed Shells from Little House of Veggies Blog (full recipe in link!) – I want to print this recipe and start handing it out to everyone who sees tofu in my grocery buggy and says, “Soooooo…. what do you DO with it?”  I believe it would win anyone over!  I didn’t have any of the big shells on hand, so I used regular ol’ lasagna noodles and made rollups out of them instead.  Sometimes when I make something that’s REALLY good, I get a little sad that I don’t have anyone to share it with.  (D suffers from a severe case of vegophobia.)  This was one of those nights.  I halved the recipe, and it was enough for 8 roll-ups (four lasagna noodles broken in half). 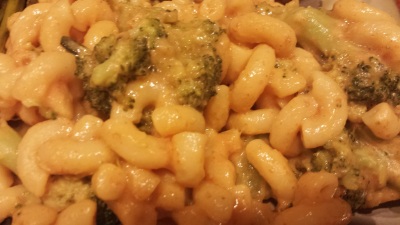 Seitan gyros with cucumber sauce (full recipe in link!) – I used the gyro seitan roast recipe from The Gentle Chef to make these.  It was my first shot at a seitan roast, so I was just happy it didn’t explode in the oven as they are known to do when not done properly!  The gyro sandwiches were great, but I agree with my friend Shelly–they fall apart so easily and are much better as a salad! 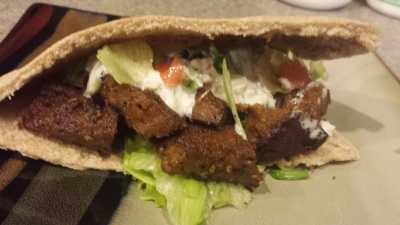 2 thoughts on “Food for Thought VII”