If you count the four-legged members, which I do, there are five members of this household.  Of those five members, 60% of us are ailing in some way.  (Coincidentally, all the females.  Hmmmm…)

First, there’s me and my leg.

Second, there’s C.C.  Once a few months ago, she went through this stage where she was licking around her nipples a lot.  It only lasted a few days, so I chalked it up to allergies.  Well, a couple of weeks ago, she started licking her belly again but this time a lot worse.  She licked herself raw! 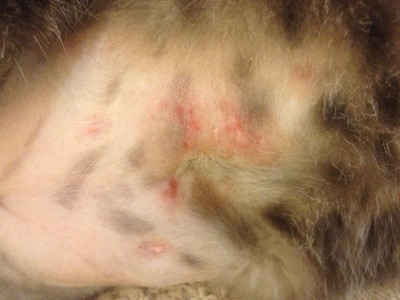 I took her to the vet on Monday and they gave her a shot of antibiotics and said if it didn’t get better to come back.  It was time for her blood work and overall well-kitty checkup anyway, so while they were doing her physical they noticed that she’s developed some pretty significant arthritis in her back hips and lower back.  I felt bad for not knowing that my poor kitty had been uncomfortable, but the vet assured me that cats are notorious for hiding pain.  She’s still pretty active and still able to jump on and off the furniture with no problem, but apparently she’s been uncomfortable doing so.  With only five days of the anti-inflammatories in her, I already see a difference in her posture and gait.  So we’re looking good on that front, but her belly hasn’t gotten any better, so we went back in for a follow-up this morning.  They just gave me a topical steroid spray to use and said to give if two weeks.

Bella also came along for the ride this morning because she’s been shaking her head a lot lately, and Harley has been licking her left ear.  Last time that happened, she had a yeast infection in her ear.  Besides that, she’s been kind of favoring her left back leg off and on for a couple of weeks.  Now with two bullies who like to wrestle… like ALL the TIME… strains are nothing new in our house.  But with this one hanging around for more than the usual couple of days, I wanted to have it seen about.  Turns out she does have another yeast infection in that ear.  When he checked out her leg, he noticed that her knee is pretty swollen, and she would wince when he would extend that leg.  So it’s ear drops and anti-inflammatories for her too!  And no strenuous exercise.  THAT’s gonna be fun… He said I can walk her, but no running.  That much, I can control.  But keeping these two yahoos from their wrestling matches, or from playing chase-and-tackle in the back yard, or from running full-speed up and down the deck stairs… that’s gonna be more of a challenge.  And on top of it all, he heard a heart murmur today that he’s never heard before.  He told me not to lose sleep over it because it was very mild, but he wants to listen to it again in 3 months and do chest x-rays and an echocardiogram if it’s worse.

Anyone got any tips on training an animal to do laundry or clean the house?  These critters gotta start pulling their weight around here!

One thought on “A Plague on My House”