… to put together a race outfit?  Four months?  A little bit overkill?  Maybe.  Even for me.

I was in Dicks Saturday with my sister, and I knew I had some money left on a gift card that I got last Christmas.  It was burning a hole in my pocket.

My next scheduled race isn’t until October 28th in St. Louis.  Being the Cards fan that I am, I knew I wanted to play that up on race day.  Okay, so I haven’t got the WHOLE outfit planned yet, but at least I now have the main component. 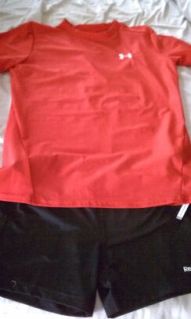 Who would have thought that a solid red shirt would have been so hard to find!  I already have four St. Louis Cardinals shirts in my wardrobe, but of course they’re all cotton, and that ain’t happening on race day.  We looked all over the women’s department for a solid red shirt of any style or brand and came up empty-handed.  After I had given up, we were walking past the little boy’s department and red caught my eye.  I took a shot and tried on a youth XL and TAH-DAH!  We have the beginnings of a race outfit!

(I also bought those shorts in the picture, but they’re not part of the planned outfit. I got them to wear underneath this skirt I bought a couple months ago that doesn’t have any built-in shorts underneath.)

3 thoughts on “How Soon is Too Soon…”