A couple of months ago, I signed a commitment form and laid down $475 to become a member of a CSA for the very first time.  (If you’re not familiar with community supported agriculture, this link describes it very well.)

Two Thursdays ago was my first pickup of the season, but I was so sick then that I just wasn’t up to documenting the occasion.  This week I’ve been able to enjoy and fully appreciate all the farm-fresh goodness, and I’m loving it!

Since I’ll be trying tons of new things in the kitchen, I’ve decided that this might actually make for good blogging fodder.  I’ll be sharing those successes and failures (which there are sure to be plenty of!) with you here.

Thursday – Pickup was Thursday night.  It was late when I got home (Yes, I consider 7:00 too late to start cooking.), so I just used the spring mix and radishes with some other produce hiding in my refrigerator for a quick salad.

Friday – For lunch I had a Tofurky wrap and used up the rest of the spring mix with that.  For dinner I was planning to make a recipe that I found in Color Me Vegan (I love this cook book and highly recommend it!) called Lemony Pan-Fried Chickpeas with Chard.  Fail #1!  I didn’t realize until I already had the chard and onion sauteeing that I didn’t have any chickpeas.  Woops!  Seriously that never happens in my house.  Chickpeas directly follows toilet paper on my list of things not ever to run out of. The lemony chard with onion was still delicious (Forgive me for the lack of photo.  I’m new to this whole “taking pictures of your food” thing.  When I see food, my first instinct is still to chow down, not grab the camera!  You’ll just have to take my word for it this time that it was beautiful.), but it obviously wasn’t enough for a meal on its own.  Enter Beet Burgers!  Another recipe from the same cook book.  I’m a little embarrassed to admit that I had never tried beets before, so I wasn’t sure what to expect.  Turns out I really like ’em!  Except they’re messy.  I had to shred the beets for this recipe, and by the time I was done it looked like someone had been murdered in my kitchen.  Lesson learned.  Next time use food processor, not mandolin.  Anywho, when you throw those shredded beets together with some quinoa (I used red quinoa because that’s what I had here.), sunflower seeds, flour, tamari, parsley, onion, bread crumbs, garlic, and a little oil, you end up with these:

Only one fell completely apart on me when I tried to flip it, but that’s okay.  That’s the one I ate with a fork with my chard/onion concoction.  The recipe said it should make 12 patties.  Ummm… the author must make beet MEDALIONS.  I make beet BURGERS.  I got 5.  And they were… okay.  Edible but not my favorite.  Oh, and I washed the beet greens and threw them in the freezer for later.

Saturday – Unremarkable other than using some kale in a smoothie for lunch.

Sunday – For lunch, a beet and berry smoothie using this recipe.  Not bad at all, but next time I will add dates for sweetness.

Monday – Beet burger again for lunch.  For dinner I made another new-to-me recipe – spring rolls!  I used about half of the napa cabbage on these babies.

I used this recipe (except I omitted the tofu) and paired it with jasmine rice.  Complete success.  They were great, although I’m sure they would have been better if I had fried them like you’re actually supposed to.  Instead I baked them.  Much healthier that way, but you sacrifice the pretty brown color and crispiness.

Tuesday – For lunch I had a fruit smoothie and threw in some kale.  Dinner was a salad using the Romaine lettuce and other non-CSA stuff.  Nothing photo worthy on Tuesday.

Wednesday – For lunch I had a fruit smoothie again and threw in the last of the kale.  For dinner I made these: 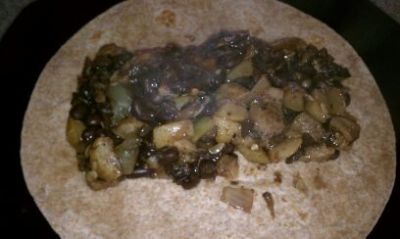 I really don’t even know what to call them.  Seasoned and sauteed zucchini, squash, onion, bell pepper, mushrooms (read:  everything in the fridge that needed to be used), and some black beans.  Whatever it was, it was delicious wrapped in a whole wheat wrap and topped with salsa and Tofutti.

And I froze the unused collard greens because I knew I wouldn’t get to them this week.

Thursday – Lunch was leftovers from Wednesday night, only this time I made them lettuce wraps with the Romaine.

And there you go!  That’s what I did with my week 2 haul!  I managed to use everything except half a head of napa cabbage (which I will take care of tonight when I make a stir fry), a head of cabbage (which will become cole slaw tomorrow), and the patty pan and butternut squashes.  And I have no idea what to do with either of those.  I’m sure I can roast or kebob the patty pan, but I’ve got to figure out something to do with the butternut.  I’ll let Google be my guide!