The race went off without a hitch! Well, for us anyway. A lot of marathoners that were diverted to the half-marathon finish line and not allowed to complete the marathon because of impending storms probably feel a little differently.

I got to Nashville about 3:00 Friday afternoon and waited in the bar at the hotel for my friend IndyLawyer to get there. She was driving in from Indianapolis, and I beat her to Nashville by about an hour, and the desk clerk wouldn’t let me check into the room because the reservation was in her name. So I sat in the bar drinking a bottle of water, much to the amusement of the other patrons at the bar, who teasingly asked, “Who comes into a bar and drinks a bottle of water?” So that started a conversation about the race the next morning. I spent the next hour or so chatting with everyone at the bar, watching CNN, and cheering for Arizona Governor Jan Brewer as she signed bill SB1070 into law. YOU’RE MY HERO GOVERNOR BREWER!!!!!

As soon as IndyLawyer parked, we checked in, threw our bags in the room, and walked to the Convention Center for the expo. OH MY GAWD was it crowded!!! We spent maybe an hour and a half at the expo getting all the freebies we could find. And honestly I was a little disappointed in the swag bag. The tiny HM in Clarksville last year had better swag than this one! Dog biscuits and Zicam? Come on, CMM, you can do better than that!

We had decided to have dinner at The Old Spaghetti Factory, but while walking there we passed a little restaurant called Pearl that we had never seen or heard of before. We stopped to look at the menu and decided to give it a whirl. I LOVE how you find the best restaurants in big cities by stumbling on them purely by accident! This place was great!

We packed it in early Friday night so we could get a decent night’s sleep before having to be at LP Field super early the next morning. LP is where the finish line was, but they were asking everyone to park there and shuttle to the start line. We were within walking distance to the stadium, so we walked there. It was sprinkling rain then. Not enough to get you good and wet but enough to kink my naturally curly hair up really good. We got there and were standing in line for a shuttle when IndyLawyer looked at me and said, “Oh. F**k.” She forgot her bib back at the hotel. I offered to go back with her, but she insisted I get on the shuttle without her and she would meet up with me. That was the last I saw of her until about 10 minutes until gun time. I was already in my corral discussing poop with a woman I had just met like five minutes prior (seriously, does anybody BUT runners do this???)and she was just getting to the start line area. By the time she jogged the mile to the hotel and back the lines for the shuttles were forever long. She got back to the starting area in just enough time to grab something to eat and head to her corral.

I had mentioned before that she was coming off an injury and wasn’t sure how she would hold up and that I was going to keep her pace. Well, that wasn’t an issue because we were assigned to different corrals. She didn’t bring up the topic of either of us changing corrals, so being the running loner that I am, I didn’t bring it up either.

Standing in my corral, I could literally feel the energy all around me. It was like nothing I have experienced before. Everyone there, all 31,000+ runners were buzzing with excitement. The sun broke out from behind the clouds as if on cue and the entire crowd cheered. When they sounded for the elites and first corral to take their marks, I got chills. It was a loooong 30 minutes before my corral crossed the start line!

And then I was off! With all the adrenaline flowing through me, it was hard to keep from sprinting out of there like a bat out of hell. I swear I really don’t even remember much of the first couple of miles. They were over before I knew it. When my Garmin beeped to let me know that I had just completed two miles, I remember thinking, “No way!” And then it started. The hills. The horrible hills. Long, gradual hills. Short, steep hills. Continuously. I had read race reviews about how hilly the course was, and I tried to prepare, but HOLY COW. I wasn’t prepared for 11 or so miles of continuous hills. And maybe the first two were hilly too and I just didn’t notice because I was so pumped. I walked early and I walked often. I walked through almost every water stop and had to stop a couple times and stretch out my calves. Overall it was a grueling course, but the spectatorship and crowd participation were UNBELIEVEABLE!!! Nashville is an amazing city! These people and these bands could have let the forecast scare them into staying home, but the streets were lined with 13 miles of cheerleaders and spirit lifters! Simply amazing. I wish so badly that I had pictures, but I don’t. I was afraid to take my camera with me because I was afraid of it being ruined in the rain.

The sun played peekaboo with us for the first 9 miles or so then it clouded up again. By that time, I was actually hoping for a refreshing shower, but it didn’t happen. By mile 11, the skies were looking pretty ominous. It was right at that point that the half and full courses were supposed to split, but because of the storms they directed all runners to the half-marathon finish line. I felt really bad for the people who had trained to complete a marathon and then weren’t able to do it. Especially this one woman in front of me. She had a shirt on that her kids had obviously decorated for her with “My First Marathon!” written all over it. I’d have been sick if it had been me. By mile 12 I was seeing the first flashes of lightning and hearing the first rumbles of thunder. I was pretty well exhausted by this point. From mile 12 to mile 12.5 or so I was down to doing a run/walk, but when I heard the first cheerleader say, “That was your last hill! It’s all downhill from here!” I tried to pick it up a little bit. My Garmin beeped to indicate mile 13, and the finish line still looked to be a good ways off. I kept an eye on it and stopped it at 13.1 and still had another .15 of a mile to go to the finish line.

Either way, I met my goal of taking 1 min/mile off my previous time. 🙂

And I have some shiny new bling! 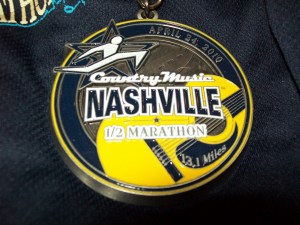 I hope and pray that my finish was captured in photo or video that will be uploaded to the site. It had to be the most graceful finish ever. I tripped over the timing mat. Yes, that’s me. The girl that makes it through months of training injury free only to nearly plant her face in the asphalt at the finish line. It seriously was touch and go for what felt like an eternity. It took me several strides to fully regain my balance. I was laughing and heard lots of people on the sidelines laughing, too. What am I here for if not to entertain??? 🙂

At the finish, there were volunteers with bull horns informing the finishers that the severe weather was 30-45 minutes away and asking everyone to please collect their medals and their bags from gear check and leave the field. We got our bag from gear check and filled it with enough of the free food to hold us until dinner so we didn’t have to get out in the rain for lunch and set out at a jog back to the hotel. It was raining pretty hard on us by the time we got there, and within 20 minutes the bottom fell out. It sucks that we didn’t get to enjoy the postrace festivities, but I am SO thankful that we both finished before it hit!!!

Overall, I am happy with how the weekend turned out. I’m already looking forward to the next one!!!